In the frame of the BRGS/SB 2022 there will be social events, excursion tours to Novosibirsk, a zoo and museums (descriptons are given below).
In addition, participants are invited to the tour to Altai

AKADEMGORODOK SIGHTSEEING TOUR “FROM PAST TO FUTURE”
Akademgorodok, a district of Novosibirsk built in 1957 under the auspices of Academician M.A. Lavrentyev, is a place of special atmosphere and unique combination of science and culture. The Utopian project realized by a team of young scientist in the sixties won fame over the whole world with its achievements. The dream came true and still exists and develops. Akademgorodok is a place of power and freedom. Why is it so far-famed? What is the history of its creation? What is its power? What was the feature of Akademgorodok in its early days and what is going on here today? All these questions and many others will be answered during the tours of our Integral Museum. The tour begins from the place of origin of Akademgorodok with a romantic name “The Golden Valley”. Our guests are going to know how it all was started, then we drive by Morskoy Prospekt and tell why is it named “Morskoy” (the Sea Avenue); we are going to stop near the House of Scientists and talk about avant-garde exhibitions of the sixties in it. Then we get to Novosibirsk State University down the Il’icha street (its architectural design was exhibited in the World Exhibition in Montreal in 1967), and then, moving toward researching institutes, we tell our guests the intriguing story of the club “Under the Integral”. Afterward we come to the extraordinary “Mouse Memorial”, talk about the present and future of science and finish our tour near the illustrious towers of Technopark.

Geological Museum was founded in 1958. The museum exhibition represents mineralogical samples from more than 50 countries and all the regions of Russia. The museum collection contains 1000 mineralogical samples (the total number of exhibits is about 20 thousand). The exhibition has 56 meteorite samples of total mass about 150 kg. The large exposition also presents more than 60 artificially synthesized minerals.
The museum represents about 10 thousand samples of minerals and fossils from Siberia and Far East in the exposition hall and more than 25 thousand samples in the museum funds.

EXCURSION TO THE NOVOSIBIRSK ZOO (http://www.zoonovosib.ru/?en)
Presently, the Novosibirsk Zoo has about 10,000  animal individuals belonging to 702 species. Over 300 species are enrolled into the International Red Book of Endangered Species, the Russian Red Book, and the Red Book of the Novosibirsk Oblast. International genealogical books are kept for 56 species. The staff of the Zoo takes part in 53 international programs on the preservation of rare and endangered animal species. The Zoo has one of the world-beating collections of felids and mustelids. The Zoo is a member of three international associations: the European Association of Zoos and Aquaria (EAZA), European–Asian Regional Association of Zoos and Aquaria (EARAZA), and the World Association of Zoos and Aquaria (WAZA). The Zoo is also a member of the ISIS information system. The mascot of the Novosibirsk Zoo is the snow leopard, a beautiful and graceful animal. Its range in Siberia is confined to Altai. The staff of the Zoo is an enthusiastic team, which conducts enormous scientific work on the preservation of endangered animal species on the Earth. They have published over 50 research papers on keeping and reproducing rare and endangered animals and on their postnatal development. The Zoo was first to obtain progeny from some rare species: river otter, Siberia grouse, Kamchatka mountain sheep, Putorana snow sheep, etc. The Novosibirsk Zoo contacts with over 150 zoos of 44 countries. Since 1989, it has traded over 100 animals with foreign partners of 25 countries.
In 2008, the Novosibirsk Zoo qualified for the final of the competition “Seven Miracles of Russia”. 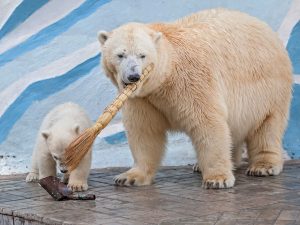 WORLD FUNERAL CULTURE MUSEUM (MUSEUM OF DEATH) (https://musei-smerti.ru/)
Museum of World Funeral Culture or Museum of Death in Novosibirsk is the only Russian private museum of its kind. Two buildings of the Museum are open for public and host the unique expositions and exhibits from ancient times to Victorian era and up to modern funeral traditions of XX-XXI centuries – embalming and autopsy, post-mortem photography, funeral processions, horse-drawn hearses, farewell ceremonies, old cemeteries, world history of cremation, mourning dresses and fashion appear in realistic interiors and authentic set up. The newly opened hall of the Museum presents exposition of funeral customs of Egypt and Africa, India and Islam world, pagan and Christian cemeteries. Special section displays funeral artifacts of the Soviet years, the funerals of Lenin with a copy of the Lenin’s body in Mausoleum sarcophagus, replica of Stalin’s coffin, replicas of coffins and funeral attributes of the Pope John Paul II, Russian Patriarch Alexis II, President Eltsine, crazy coffins from Ghana and more. The Museum boasts unique collection of over 10 000 engravings and prints with funeral motifs from all parts of the world, fantastic collection of sympathy and memorial postcards, the largest collection of funeral cars scale models and horse-carriages, as well as real funeral cars of various times, over 200 mourning dresses of several centuries and much more.
Detailed information and photos of various collections of the Museum are available at this page https://musei-smerti.ru/kollekzii-i-exponaty/.
The World Funeral Culture Museum is a member of the International Association of Funeral Museums.